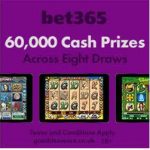 The highly popular £1,000,000 Slots Giveaway promotion returns to Bet365 this beginning of the year. With some fantastic cash prizes to be won in this bingo & games promotion, the next 4 weeks will see many winners among Bet365 players. Get involved with Games at bet365’s £1,000,000 Slots Giveaway promotion from 30th January until 26th February, for a chance to win multiple cash prizes over eight prize draws. Earn prize draw tickets for every £10 staked on qualifying games – you will get one ticket for wagering on Featured Games and two on Double Ticket Games. There are unlimited tickets on offer, so the more you collect the better the chances you’ll get into the winning prizes of up to £5,000 – get involved today and visit Games at bet365 on your desktop, mobile and tablet! 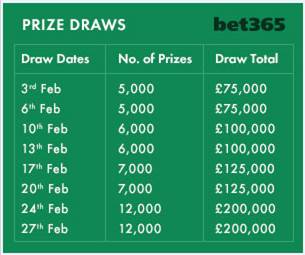 You can grab double tickets while playing the following games in selected periods (All available in Bet365 Games & Bingo sections):

We use cookies to ensure that we give you the best experience on our website. If you continue to use this site we will assume that you are happy with it.OkRead more